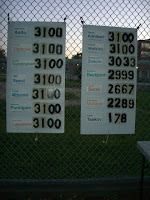 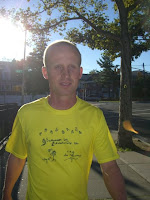 Ananda Lahari started his 56th day with nearly 67 miles between himself and the completion of his 3100 miles. In this, his 4th year at the race, he would for all intents and purposes, have an almost impossible amount of real estate to cover, in just 18 hours, in order to complete his journey here today. The numbers are almost impossible, and when I question the experts, they all say, he will need at least part of an additional day on the course.

Who could blame this kind of logic. He had not run, anything like this kind of mileage in the last 50 days. He is a natural runner with amazing potential. He has 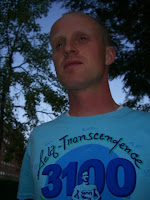 shown it here in previous years, and when he once won the 47 mile race, on Sri Chinmoy's birthday. He has been enthusiastic and cheerful through long days and weeks of physical problems. He has been bright and optimistic with 47 miles under his belt, while others have been glum, even when they ran 20 miles more.

His outer performance here this year has been an enigma, but the clarity of his inner dedication to his Guru is breathtakingly luminescent and profoundly solid. He is one, whose faith and dedication are as deep, and as sweet as the childlike core of his heart, and as high as the distant twinkly stars of heaven itself. Today Ananda Lahari will perform something astounding and miraculous, on his last day at the 3100. 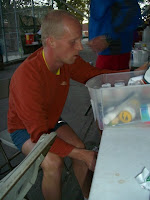 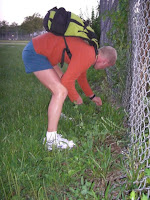 When he arrives this morning it begins a s a typical day. He goes first to the small field next to the starting line looking for the leaves that prevent blisters. It is a typical morning and I think to myself, his story will need be told only tomorrow. Certainly not today. 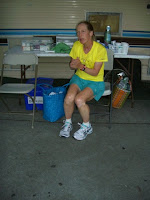 Tomorrow of course belongs to Suprabha the all time veteran of the 3100. 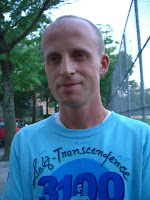 And so this young Slovak runner steps to the line for the 56th time this year. He is peaceful, and he is deeply calm. Yet somewhere inside this slight and slender exterior burns a celestial fire, with power enough to move mountains. 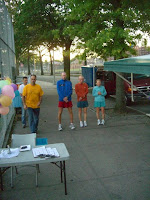 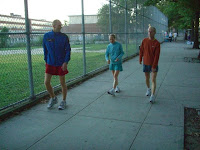 Pavol knows his race will be over today. He encourages the others, and they chat about his finish later on this afternoon.

I get a chanc 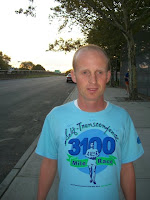 e to talk a bit with Ananda Lahari and I ask him about the ups and downs of his days here at the 3100. At first he says, "It's like a play." Then he changes his mind and says that everything, "is God's grace and compassion." We have talked at length about his various ailments. His long bout of shin splints, his liver problems, and digestion too. To him the lack of energy he has often experienced is felt like he he is carrying an extra 20 kg. on his slight 60 kg frame.

He feels that every experience he has here is just part of his transformation. That each challenge, on no matter what level it comes just provides an opportunity to make progress. He feels the need to be almost spontaneous and intuitive in how he runs. He will have an inspiration, to run fast lets say, and then just acts upon it. If he responds too powerfully he will then just back off. The important thing is to act upon the inspiration without hesitation.

His first race was a difficult one for him, but in his second year he came back and broke it by many 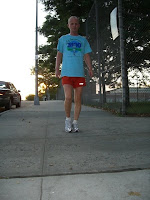 days. Last year he finished in 49 days and 16 hours. This was just 2 hours longer than his best the previous year. He tells me, that there was no question he was coming back this year. His hope of course is to run the race every year for as long as possible.

He cannot remember when it took place exactly but he remembers a year when Sri Chinmoy asked him personally if he would return. He told his teacher, "if it is your will." Sri Chinmoy responded, "my will is every day." Ananda Lahari still 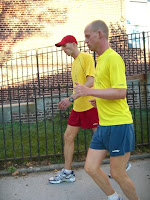 does not know exactly what those words meant. The result nevertheless is that an inextinquishable fire burns inside him to try and please his teacher at each and every moment.

I ask him, as he will soon be finishing if he looks forward to the finish line. He says, about all the celebration that greets each finisher, "If we ran for 50 days just for this it would be sad. I really try and enjoy every day. I try and feel that it is my race." He says that in a 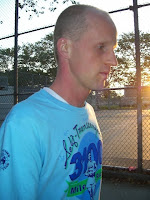 few years nobody will remember the time and placing of those who run here. It is important to be in the here and now. Learn the art of not pushing, go with the inner flow, and try and try to do your best at every moment.

He tells me about the times, including last year when he would just start sprinting during the race. He has in the past run 70 mile days back to back that included such feats. He feels that it is all part of listening to his inner voice. He says, "it is a perfect place to listen to your inner voice." Also, in the forgiving world of the race, "If I make a mistake, I don't harm anybody."

He reads the lyrics from the day's song 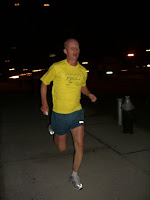 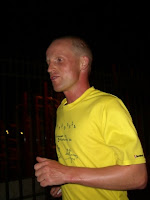 I leave the course with the certain knowledge that Ananda larhari will not finish until tomorrow. I am wrong. 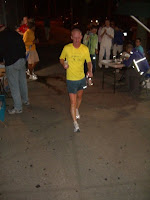 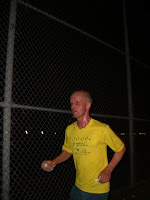 I call up at 10 o'clock and hear that he will finish soon. I am told that he is sprinting. He had told me that, sometimes in the evenings, inspiration would take hold and he would just run fast. I had no idea how fast he could run, after being here so many days and miles. 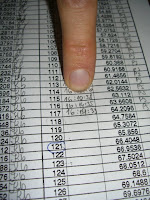 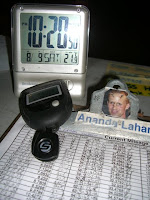 I rush back to the race and see that he has transformed himself, in a very real outer way. He is running like a marathon runner on his last few miles.

One of his lap times drops, to an unbelievable low, of just 4 minutes. 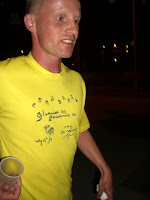 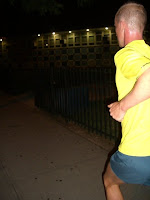 I will try and run with him but can hardly keep up, and certainly could not write at this speed.

The only thing I can write is this, "I am just a little child. It is all God's grace and compassion." 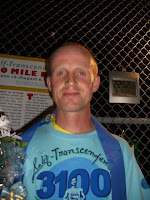 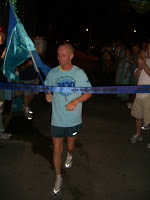 He becomes the 10th runner to complete the race on this sacred ground. He finishes in 55 days, 16 hours, averaging 55.6 miles per day. Sahishnu will say of him, on this night, that Sri Chinmoy once said of him, "he has the best smile." Of what he has accomplished here, it can also be said, that he is a champion. Both on the road and in his heart.

The Victory song is sung 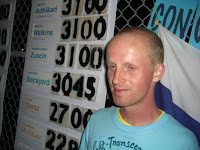 Your smile means so much to me,

Your smile feeds my reality within,

Your smile liberates me from world-clamour and

Smile at least once in a while.

Excerpt from A Soulful Cry Versus A Fruitful Smile by Sri Chinmoy.
Posted by Utpal Marshall at 12:57 PM