The Road to Brindavan

"The power of God is with you at all times; through the activities of mind, senses, breathing, and emotions; and is constantly doing all the work using you as a mere instrument.”...Quote from the Bhagvad Gita

The road out of Delhi was light with traffic while the sky was thick with haze.  We were not exactly going to Brindavan but the birthplace of Sri Krishna was not far from where we were staying in Mathura. 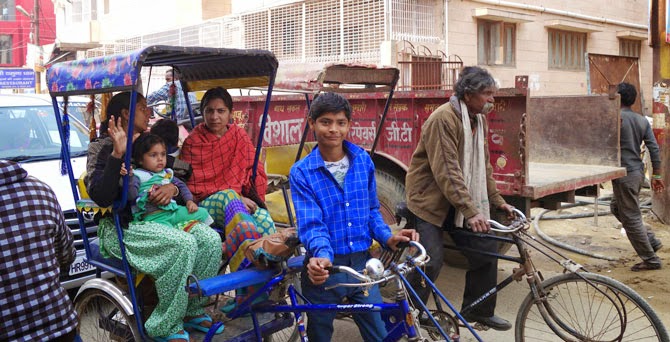 In Mathura there are several important Krishna temples.  The first destination was Banke Bihari.  The driver parked the car as the Sunday crowds filled the road.  Sanjaya, myself, and the driver rode in a pedicab to the temple. 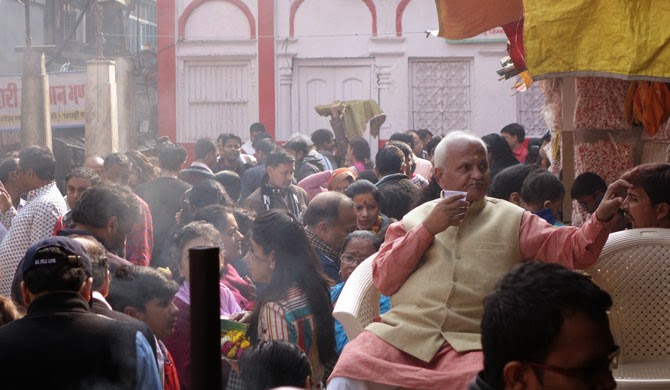 It is hard to describe the utter outer chaos and yet somehow things still manage to work.  Here in this building the shoes are kept by those who don't want to just leave their shoes on the ground. 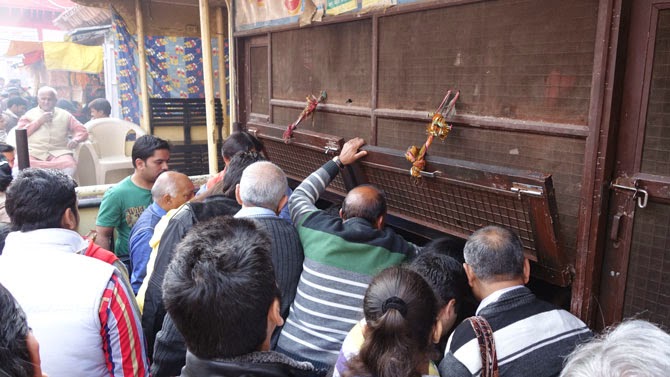 On the way into the temple a large crowd had stopped to watch a monkey, high up on a pole chewing on a man's eye glasses. 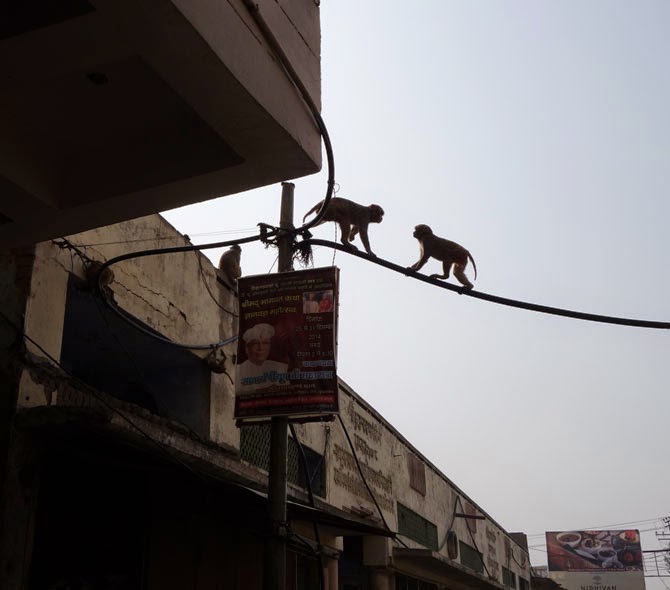 Pictures cannot be taken inside.  Outside there is a busy sale of offerings which one gives to the priest at the altar. 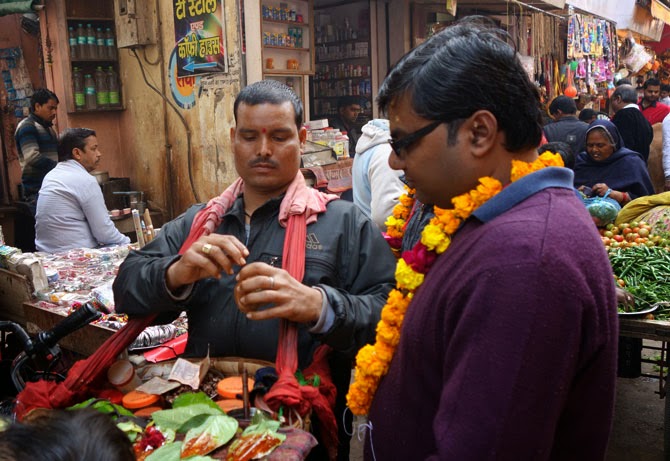 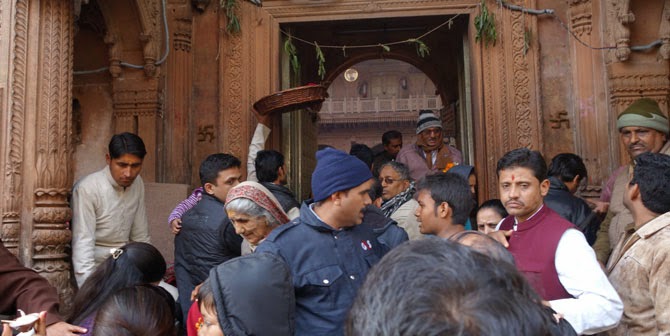 Some scenes along the road seem timeless. 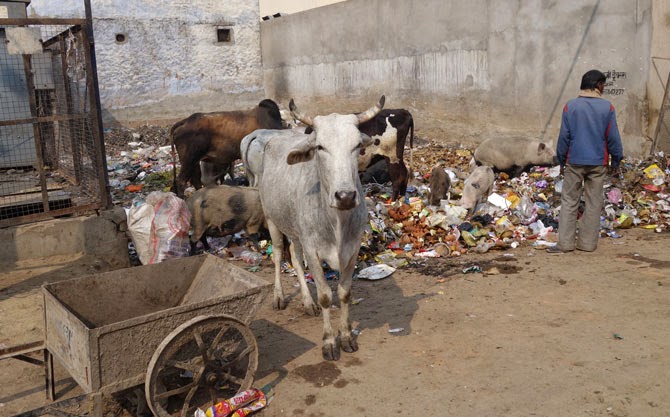 Sanjay meets a British Hare Krishna devotee who wanted him to buy a book and give a donation. 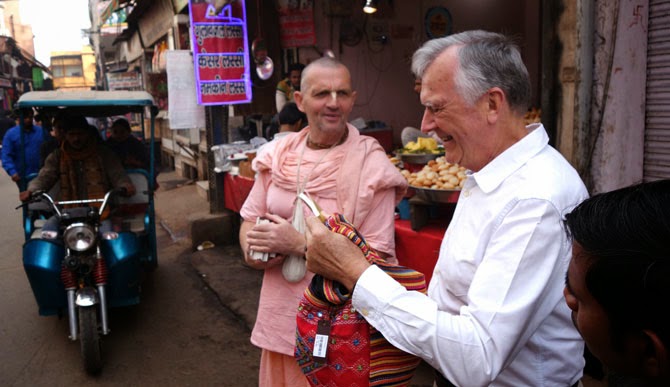 Our next stop was the ISKON temple. 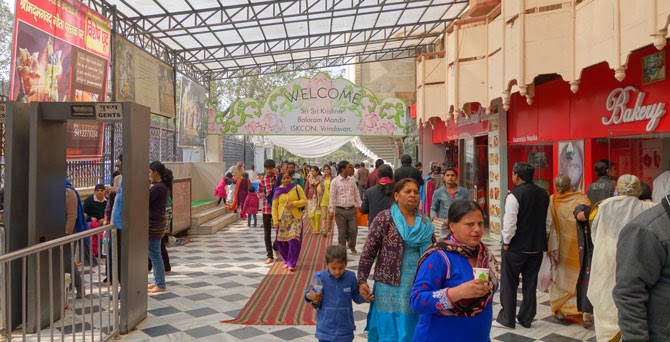 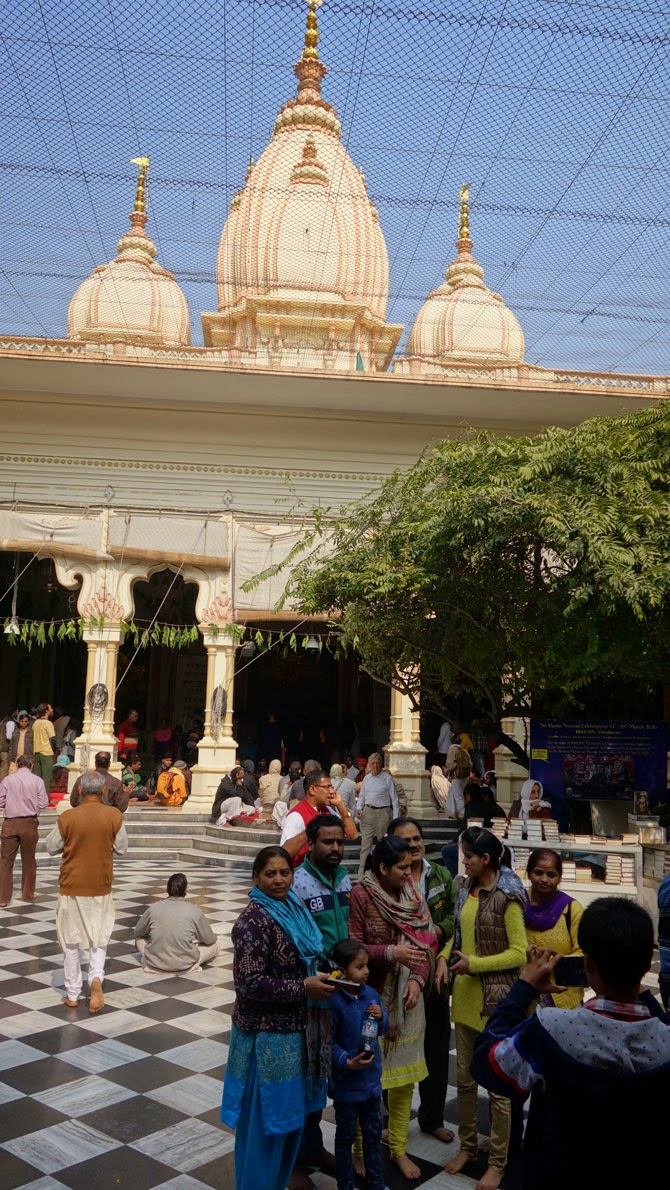 We had rushed because all the temples close at noon and remain so until 6pm. 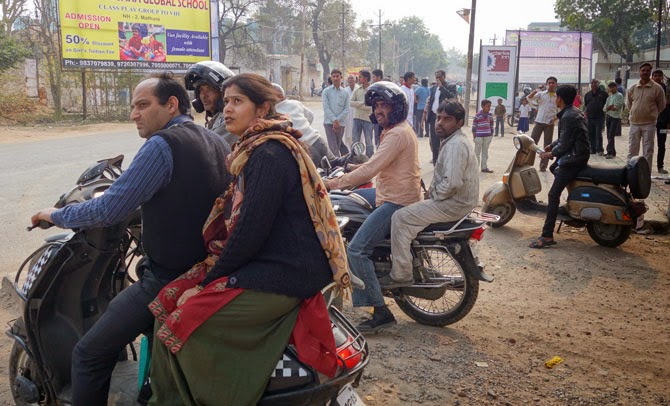 Back at the hotel we were having lunch when a commotion drew us outside.  There had been a terrible accident. 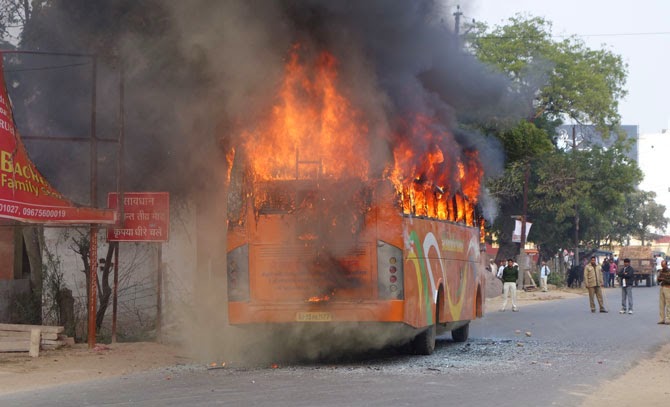 A burning bus did not make sense.  We had heard no loud noises.  How could this happen literally just outside our door. 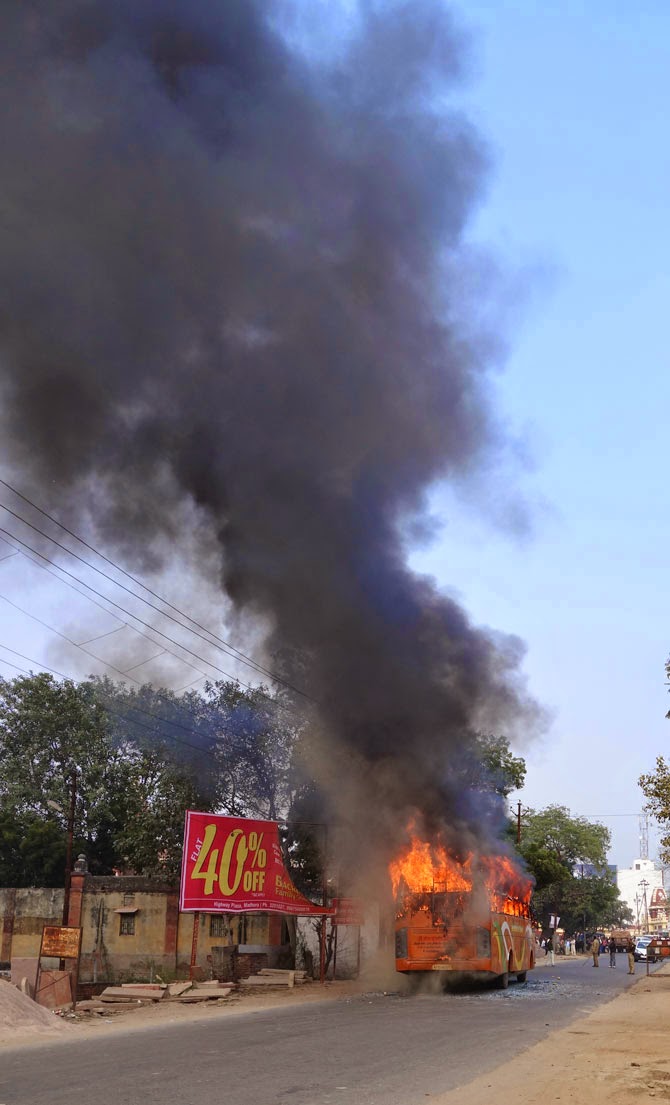 As I learned the details the story just kept getting worse.  100 yards up the road the local bus had run into the back of a motorcycle on which a man was carrying 2 young boys.  One 10 year old was instantly killed.

The driver and the other boy survived apparently.  The driver of the bus went to the police station immediately after the accident.  It probably saved his life.  Angry bystanders quickly destroyed the bus fueled by rage and frustration.  They probably did not know anyone involved. Yet they could not stop themselves.

My waiter at the hotel mocked the incredibly slow arrival of the fire department.  It took at least 20 minutes after the fire had started.  With sirens blaring they arrived well after the flames had already died down. 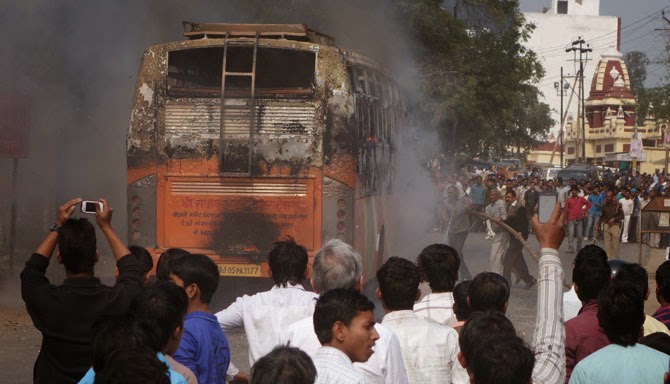 The body of the boy remained for some time at the scene.  A very large crowd gathered around him and the surviving man and the other boy.  They were long gone by the time I took this picture.  A pool of blood remained on the ground. 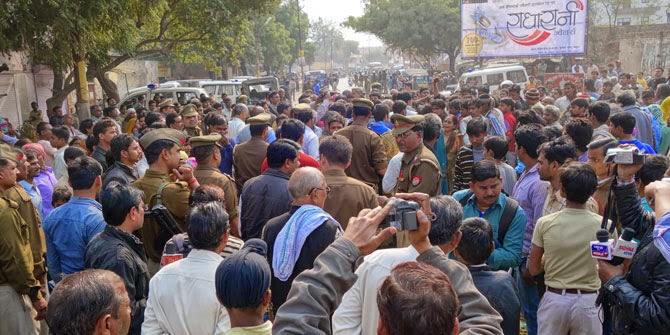 Important people came to see and clearly to be seen.  I asked our driver if he had ever seen anything like this.  He said he had not. 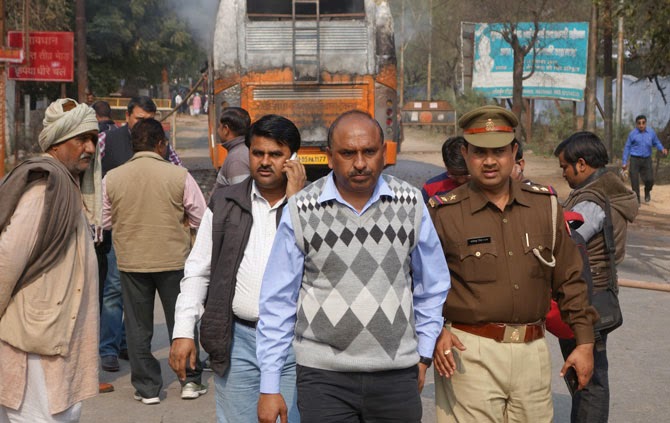 It was a strange violent contrast to a day that had been up until then mostly one of peace. 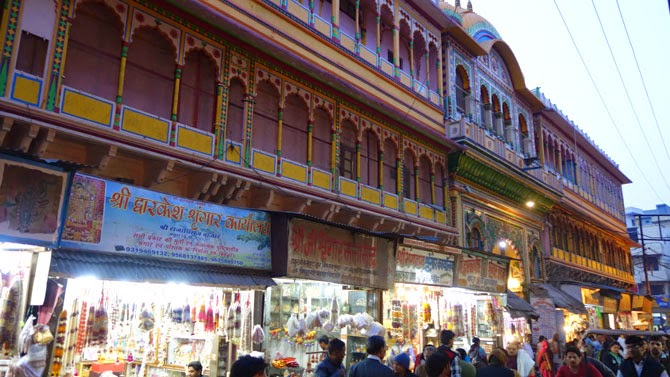 Late in the afternoon with the temples opening we went to the Dwarkadesh temple.  But it was also chaotic and so then moved on to the Vishram Ghat.  It was the complete opposite.

Krishna is said to have come here to rest after killing the demon Kamsa. 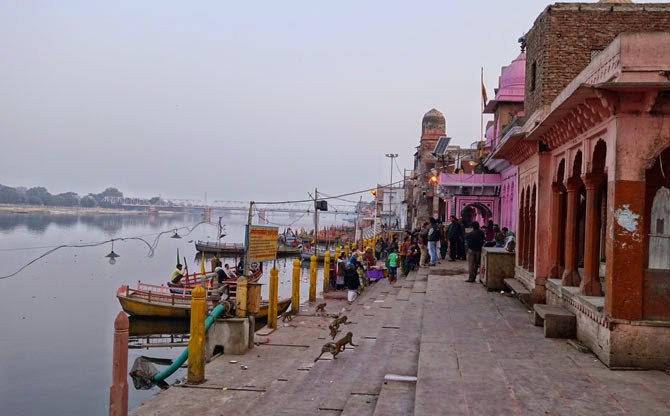 Compared to everything else in Mathura this was a kind of heaven.  The Yamuna river is sacred and continues on to Agra and the Taj Mahal. 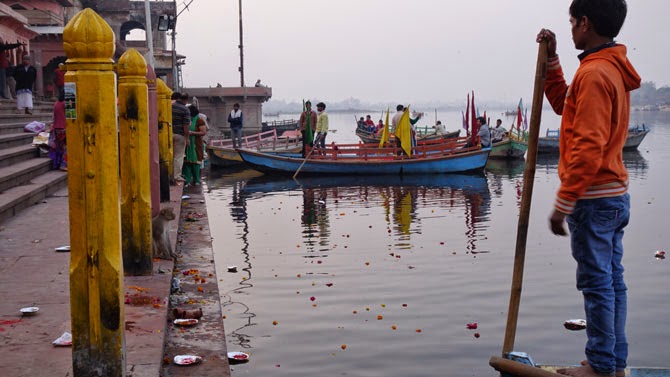 Yes there are monkeys, and other mischievous creatures. 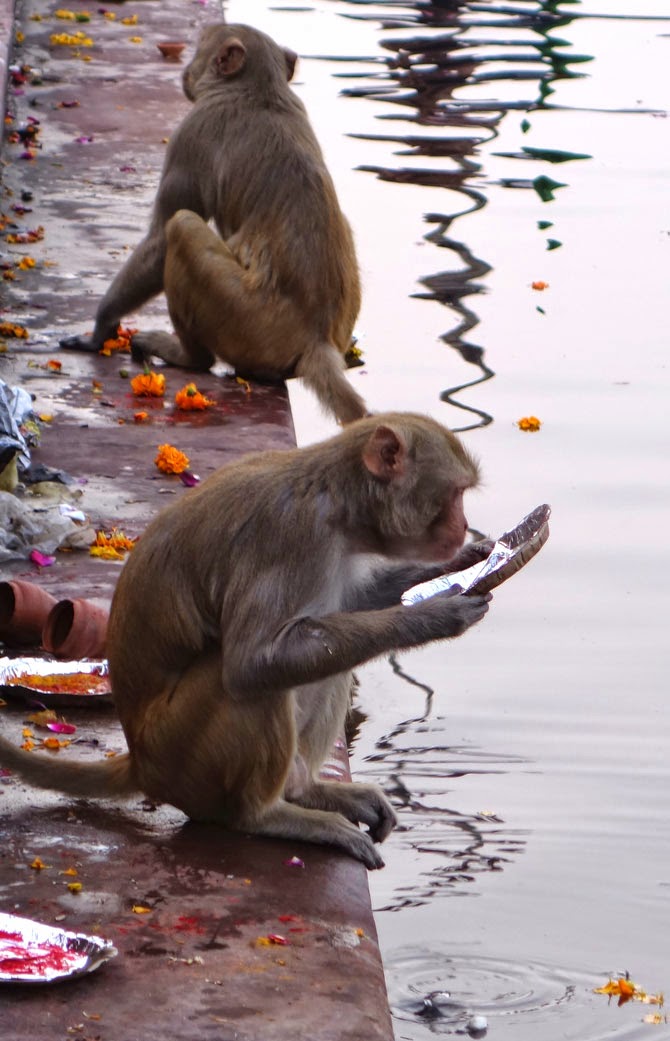 A bride arrives to celebrate her recent marriage. 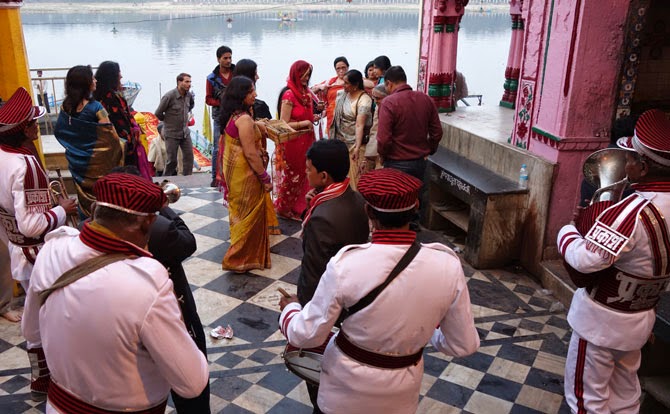 A small ceremony is performed by one of the many priests on hand. 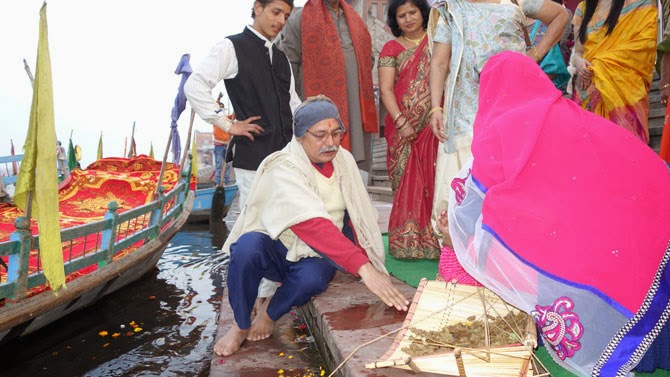 She has brought her own crew of photographers.  She is in red the priest wears the grey cap. 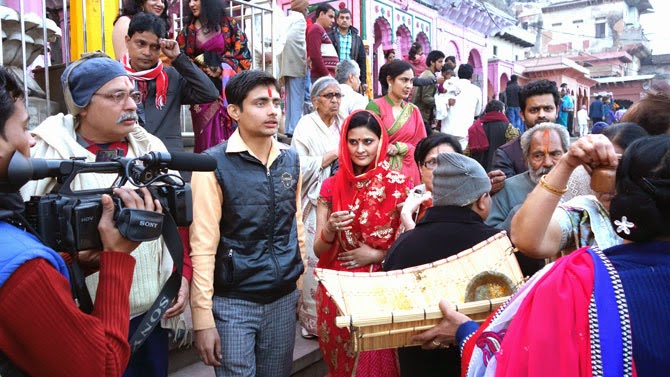 She has a fistful of money and hands it to the priests that surround her.  The priest in the grey hat somehow does not get paid.  He storms off very angry.

Some of the other priests taunt him as he leaves.  He does not come back.  When he sees us he reminds us that he is a priest that he is blessing us.  We bless ourselves by leaving as quickly as the bicycle man can ride back up the hill from the river. 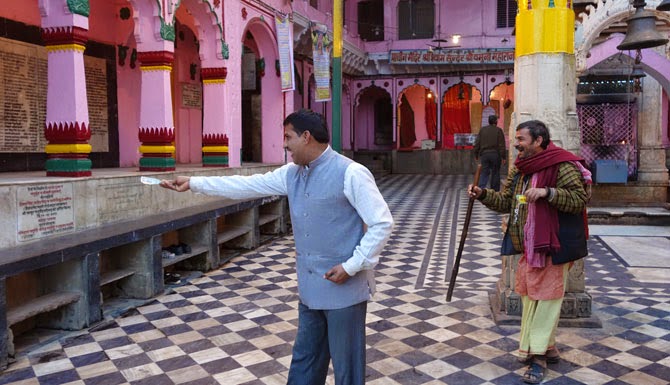 "You have the right to work, but never to the fruit of work. You should never engage in action for the sake of reward, nor should you long for inaction. Perform work in this world, Arjuna, as a man established within himself - without selfish attachments, and alike in success and defeat.” ....Bhagvad Gita 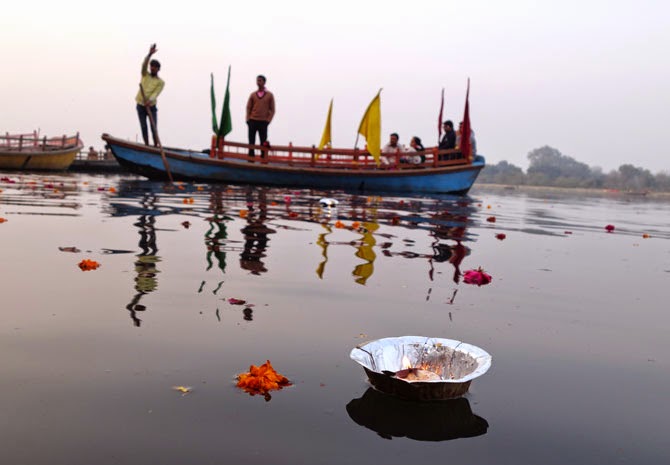 Posted by Utpal Marshall at 8:53 AM