As time has passed I have continued to accumulate more and more interesting and satisfying Bali experiences.  Since my first visit in 1988 this small tropical paradise has continued to provide something unique and special with each new visit. 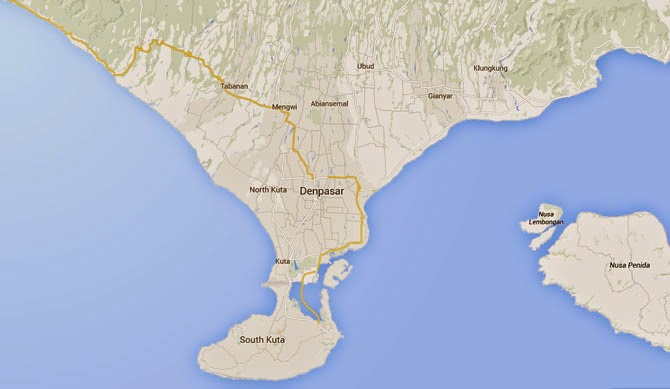 In 2004 I went in a taxi with some friends to visit some of the carving shops on the road that leads to Ubud.  At one point we stopped in an area of stone carvers.  As the others examined the art work in the various small shops I wandered out back behind and down a small lane.

What I found there was an amazing landscape of endless rows of stone statues of all kinds that seemed somehow abandoned.  Of all shapes and sizes they were gathered here and there on any clear flat patch of earth that they could be placed.  All extremely heavy and clearly not moved in many many years.

It was amazing, yet there was no explanation at all for why they were collected there, who owned them, and what would be their fate. 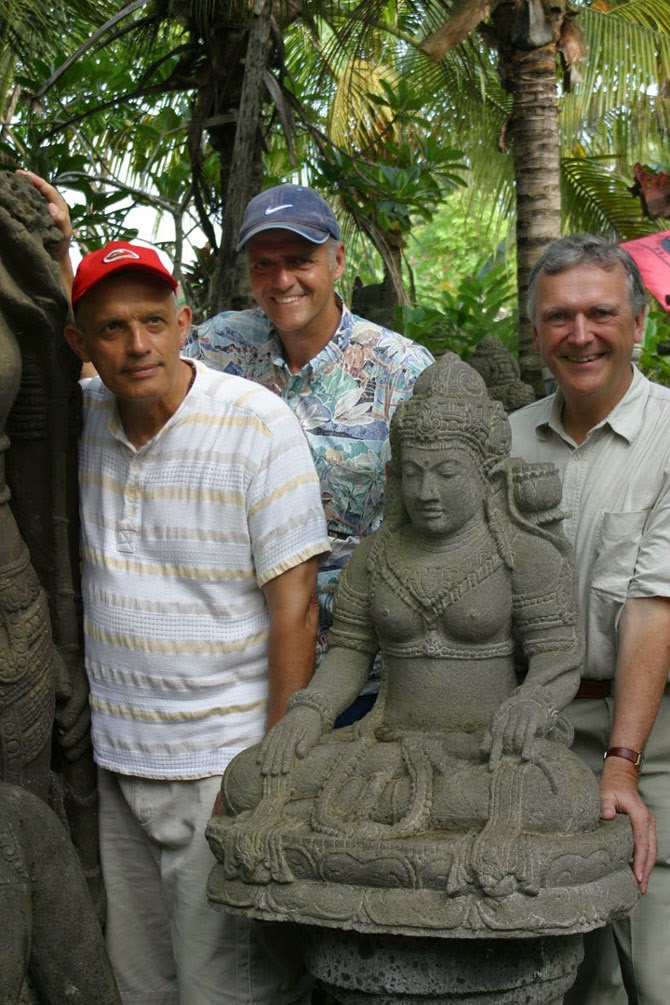 Abedan took this picture with his new fangled digital camera and would eventually give a copy of it to each of us.  We took the experience as just one of the wonders that is the Bali experience.  Kaivalya, here wearing the red hat, saw something else.

An artist and  sculptor, he soon took upon himself just a few years later the task of creating statues of our teacher Sri Chinmoy.  In 2009 one of his statues was erected at the Arma museum in Ubud. 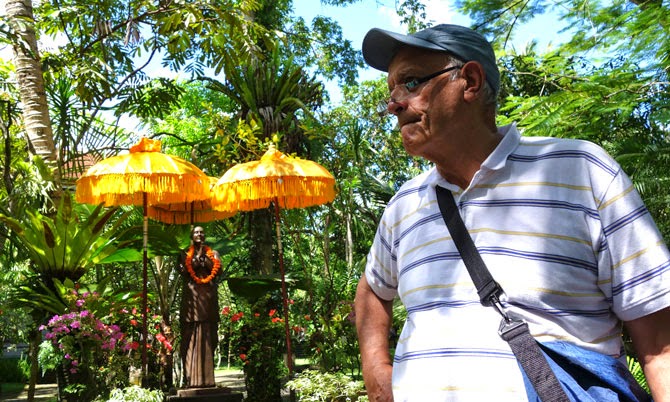 Kaivalya clearly wanted to revisit the place of stone statues again.  We all enjoyed it but he got tremendous inspiration and so on subsequent trips to Bali he set upon himself the task of rediscovering this most unusual statue garden.

It was something that Sanjaya and myself volunteered to assist him with just 3 years ago but we failed miserably.  We wandered up and down the road in the oppressive heat and humidity looking for the little lane that would lead us back to the magical grove of statues but could not find it.

On his last day in Bali 3 years ago Kaivalya on his own claimed to finally have unlocked the mystery of where it was and found the answer of why it resisted revealing itself to our expeditions on at least 2 occasions.

The simple answer Kaivalya insisted was that the lane leading to the area had, over the years had been closed off.  It had to be approached instead by an alternative method but in fact was still there. 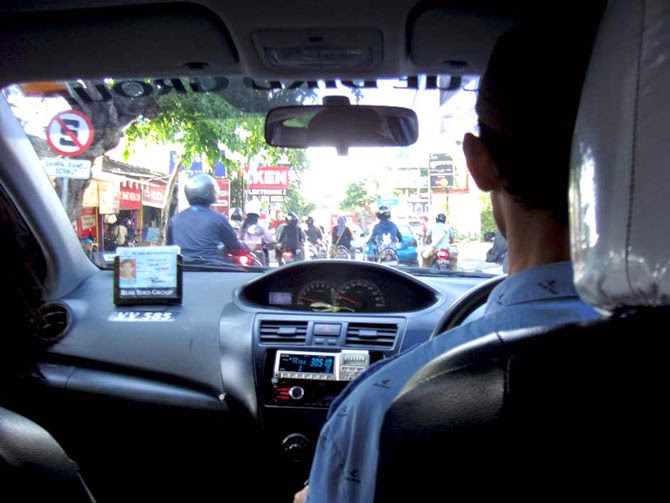 So yesterday we booked a taxi to resume the hunt for this peculiar and wondrous place.  Our team and spirits diminished by the absence of the the 4th partner of the original expedition Abedan.  Who was holding down the fort in New York.

On the way we stopped at a small collection of wood carving shops.  Mostly open in the early morning they had nearly all closed by the time we had arrived.  One worker had just applied oil to this large carving before we wandered in.

Kaivalya is chatting to the shop girl in the distance.  There is nothing about the craft and art of statue making that he is not interested in. 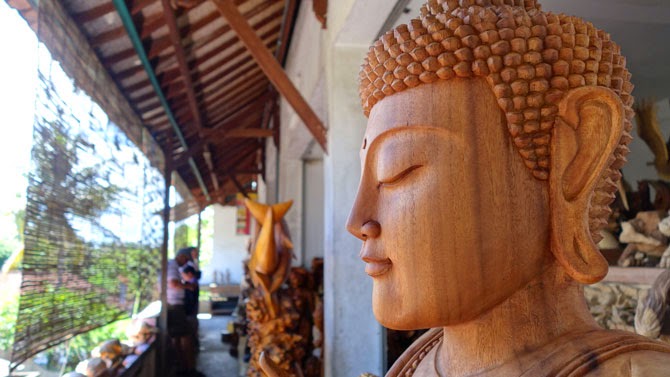 As we drove closer to the spot where Kaivalya insisted that the statue grove was his excitement grew.  Sanjaya and myself had more than minor doubt about our probability for success.  We had spent what felt like hours on our previous visit wandering up and down the road, unable to discover it.  My guess was that it would always remain a mystery.

Kaivalya however was insistent that it would once again be revealed to us.  He directed the driver to make unusual turns here and there.  Coming at it from a completely different vantage point.  Then, just like that, we had arrived. I was wrong. 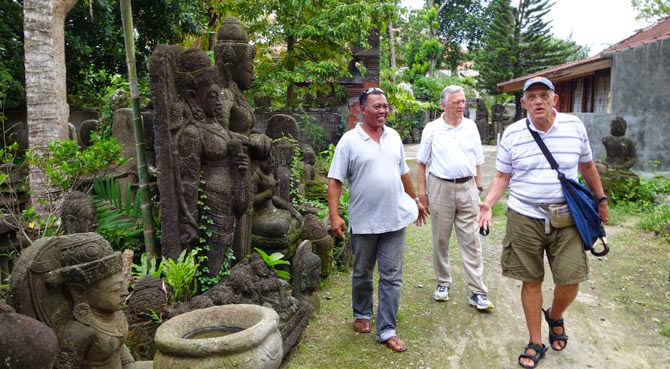 Even the taxi driver was a little amazed. 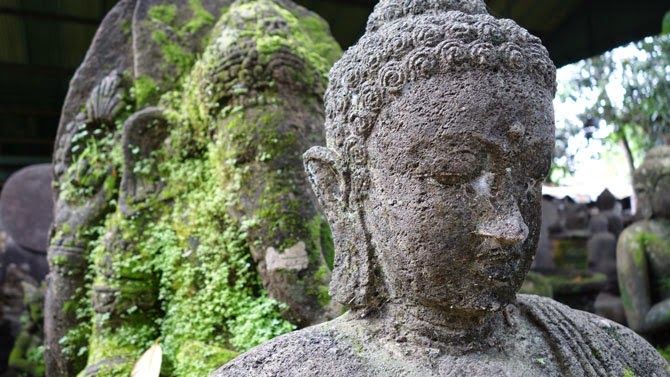 A Buddha next to Ganesh. 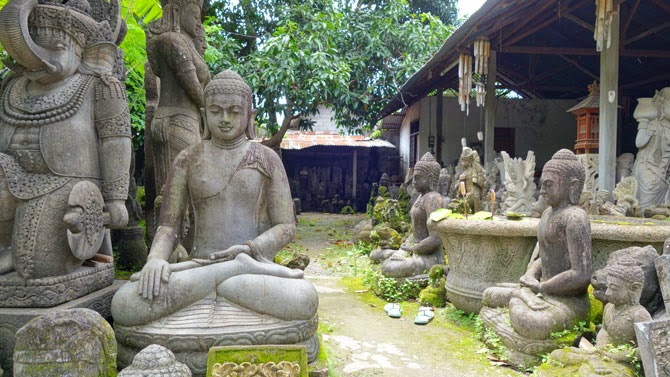 Yet as abandoned and lost as all this art appeared to be, there seemed like someone or some small group, still cared if not still loved it all.  My pictures do not do justice to the actual astonishing scale and quantity of art collected here.

Though clearly the work of many many artists and now owned by whom?  What purpose did this place serve that was nearly impossible to be found, and how so few could come and enjoy it. 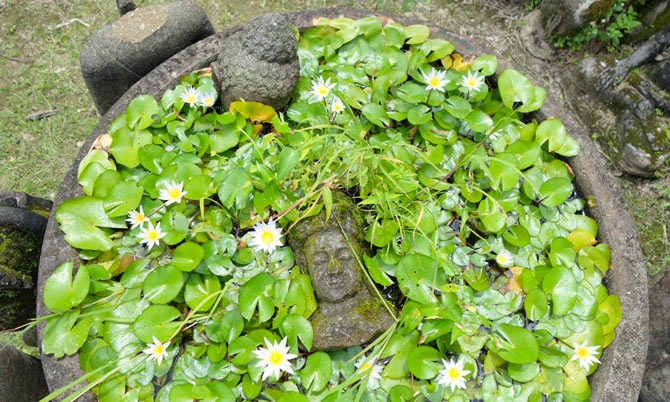 Would any of these pieces be placed in sacred places ever?  The question asked, in a Muslim country on a Hindu island, who would want or need a statue of Lord Buddha. 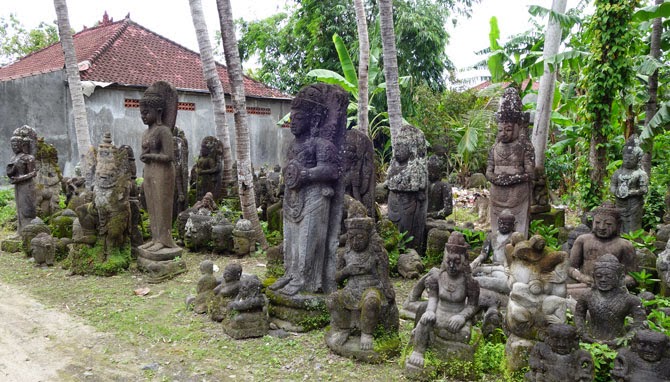 Some pieces seem as though they will rest eternally here. 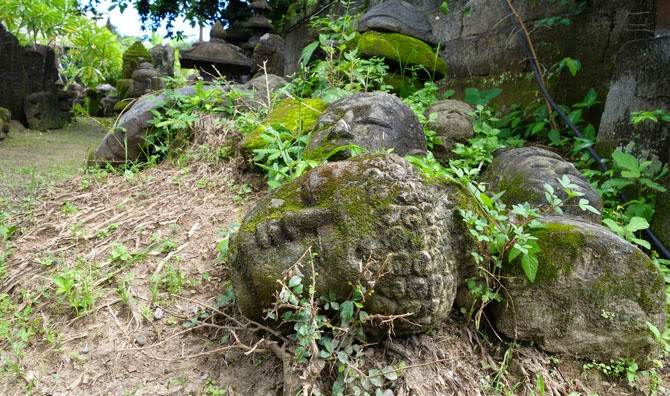 I can't say that it has changed or not in the 10 plus years since we last came upon it.

Nature alters and transforms such objects when left unattended in ways that I do not understand. Their beauty and mystery only enhanced by the blessed touch of nature.

How long has any of it been here? 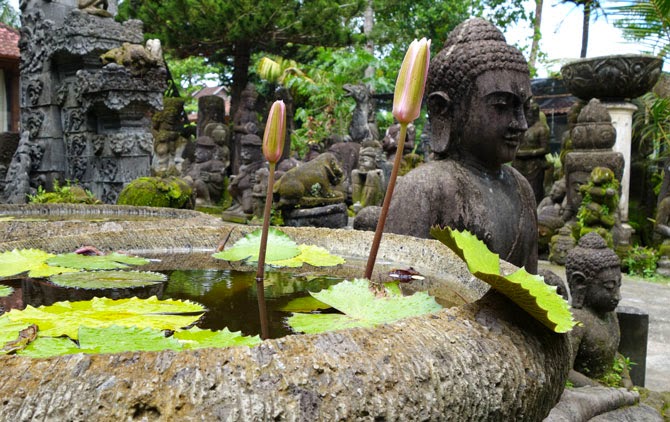 Somebody or others care enough to keep the jungle from taking over.  But in some places garbage was piled up and a dog scrounged for food. 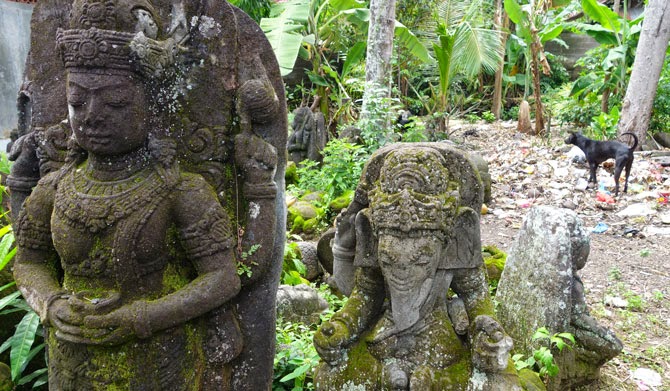 We asked the taxi driver to ask someone to tell us more about this place.  A lady came out from one of the shops and said that some things had been here for at least 25 years but could not offer more than that.

The idea came forward that now, very few heavy stone statues like this are rarely even made.  That lighter cheaper cast ones are made instead.  But I could not help thinking and feeling just how wonderful it was to come upon this place so unchanged and timeless. 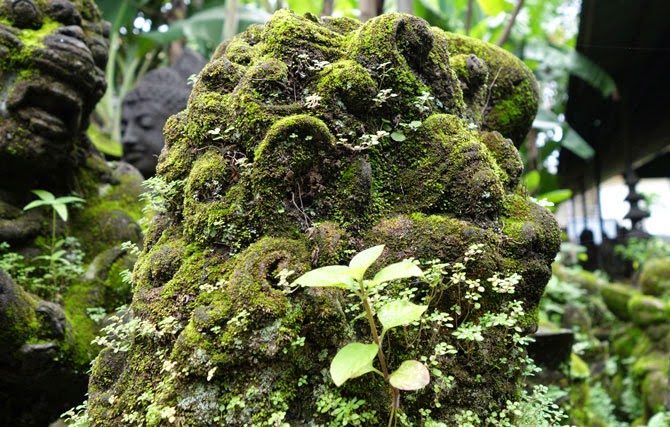 It was beautiful and strange and incredibly satisfying to come here.  Also glad that we shared the place and the moment with no one other than our small group.  And of course all the Gods, spirits, and angels who dwell here in and amongst the statues.

We tried to recreate the original picture.  All of us more changed than the statues around and about us. 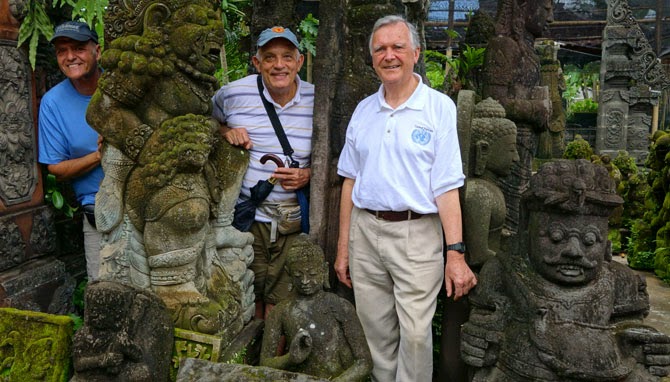 Perhaps one day our small group will come back again, and pose awkwardly amongst the stone.  But then again maybe we will not be shown the way again.  Maybe it all will remain just a sweet and cherished Bali memory. One captured on this page for an electronic eternity. 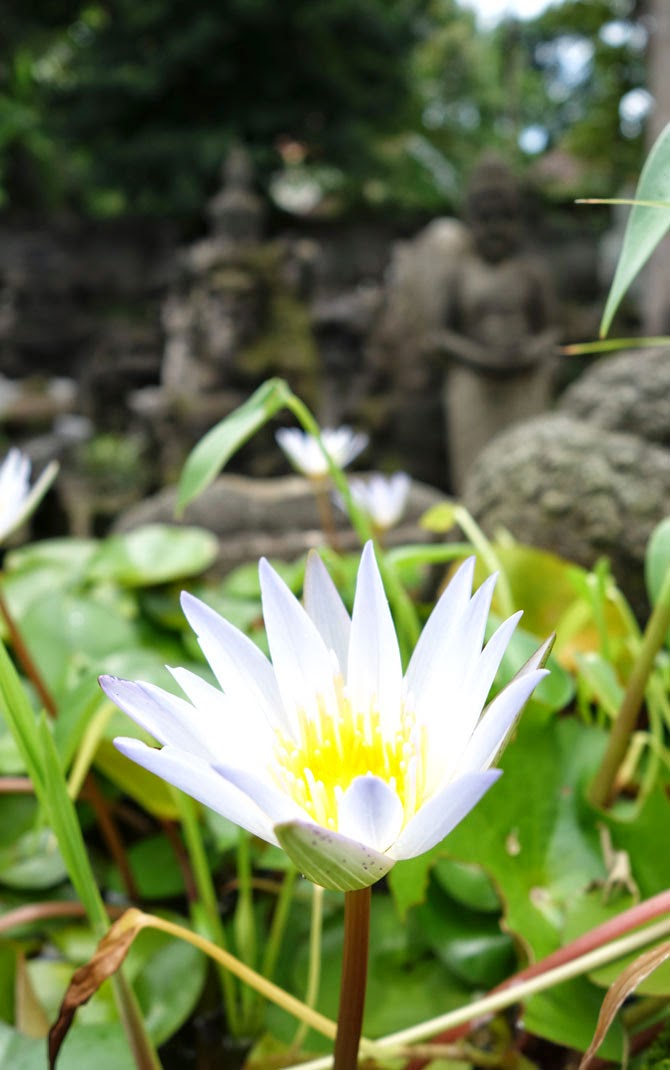 Thanks for your report. Even if I never get back to that place physically, the sweetness of those memories will remain.