There is always a pervading sense of peace here.  I tried calculating just how many times I have been here to experience the magical charm of Bali, but am not really certain just what the number is.  This must be at least my 5th visit. 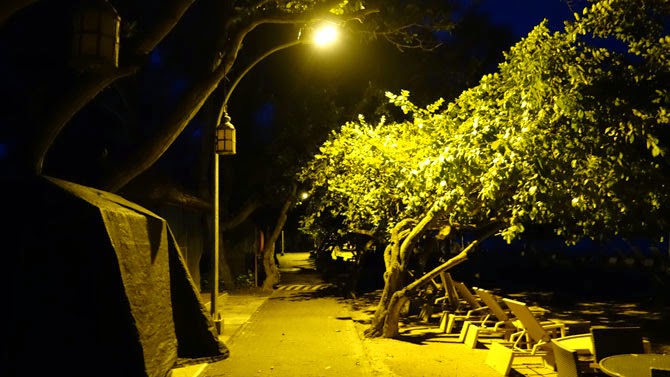 Something calls me out most mornings.  In the tranquil hour before the sun rises, while the dogs still doze under the trees, and before men rise up from their mats and go out and do meaningful things.

It is at that time that I enjoy this place most.  Have unexpected but not necessarily surprising experiences.  There seems to be endless supply of beauty that can be enjoyed no matter whether your eyes are open to it.

Particularly after nights filled with tumbling torrents of rain.  The morning then slowly opens up revealing its brightness and all its sweet promises.

I am sure there is some pleasure in long distance travel, but I have yet to see it.  We endure such discomforts though to get us to a place like this. 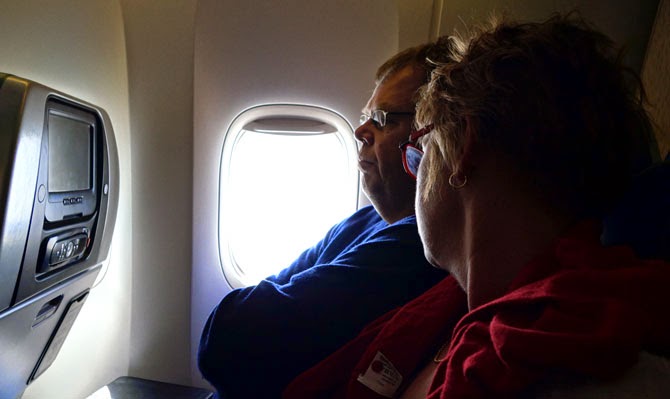 But perhaps there is a price to be paid for all fulfilling rewards.  Some struggle, some effort, some wistful hopes that all things lead us on to something better and better. 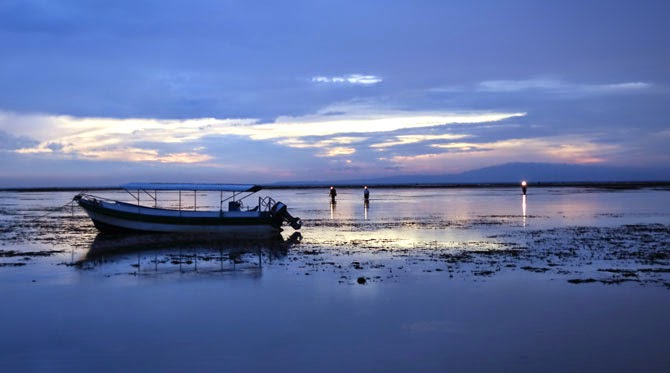 Of course I am not the first out in the mornings.  Fishermen with headlamps have waded out before there was even a hint of light in the sky.

And the Goddesses of course have never slackened in their endless vigil guarding the dawn and the warm calm sea stretching eastward. 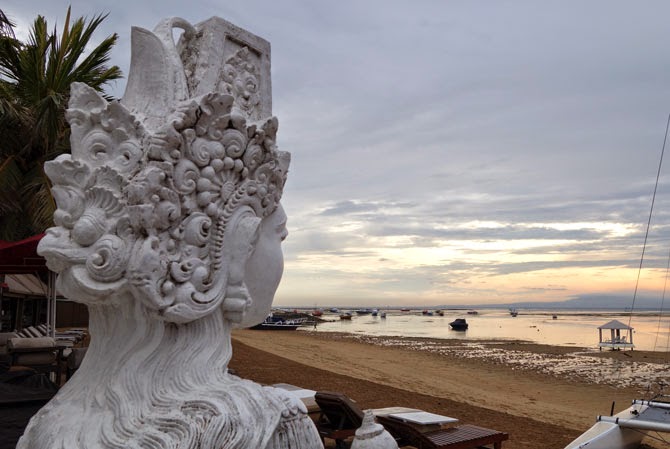 And there are other hard faces along the shore whose expression may not be as gentle but certainly whose fierce eternal vigilance cannot be challenged. 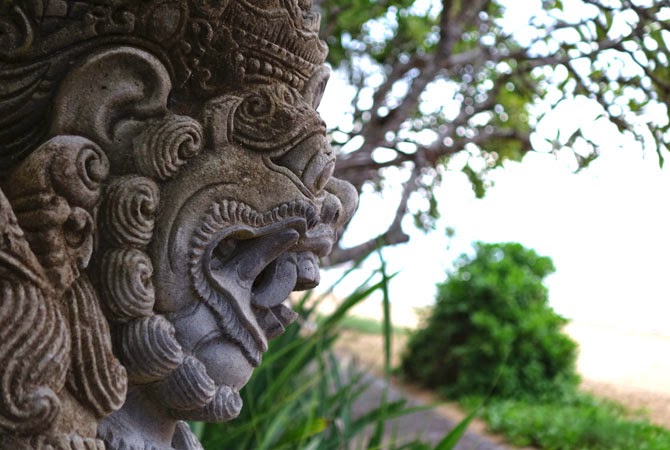 On some, but not on all mornings, one can see the far off summit of Mount Agung a volcano.  The highest place on the island, and a feature so massive that most mornings it wraps itself in clouds. 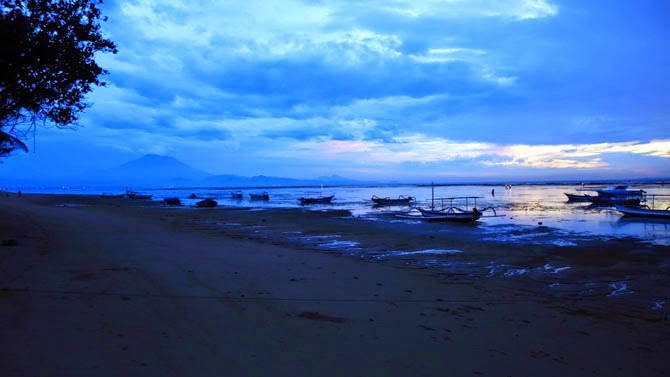 As the sun rises, the sands and shore paths gradually collect and draw others.  Some like me taking photos and others sitting in little shrines hoping to be blessed by the sun. 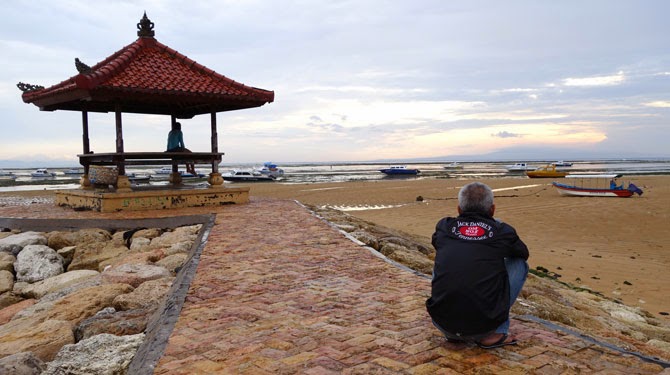 Almost as soon as they can see, the beach workers are out on the thick damp sand with their heavy rakes.  But a brief passing shower can easily dampen their enthusiasm for such tedious tasks. 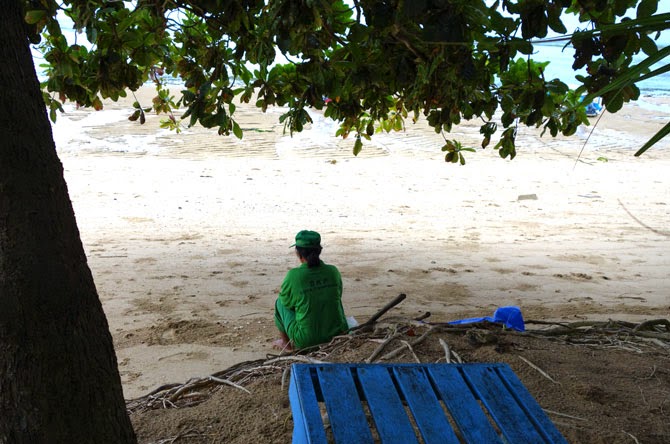 Some responsibilities cannot be put off.  A man walks his big dog along the beach. 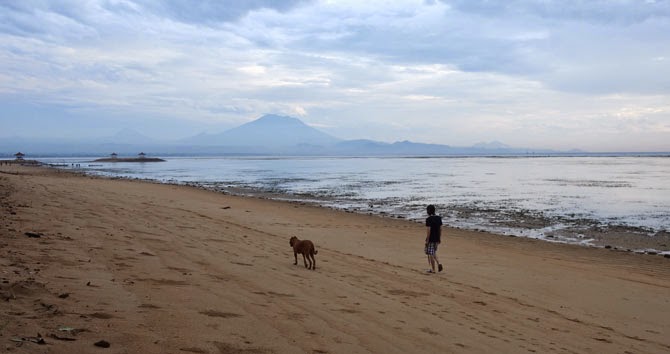 What is sometimes easy to forget is just how significant Mount Agung is to the people of Bali.  In its last eruption in 1964 it killed 200 people.  But in its taking of life it also spared a sacred temple on its side.  Adding even more awe and mystery to its imposing presence

It is considered by locals here as being formed from a fragment of Mount Meru.  According to mystics and the faithful, a place that is the center of the spiritual Universe 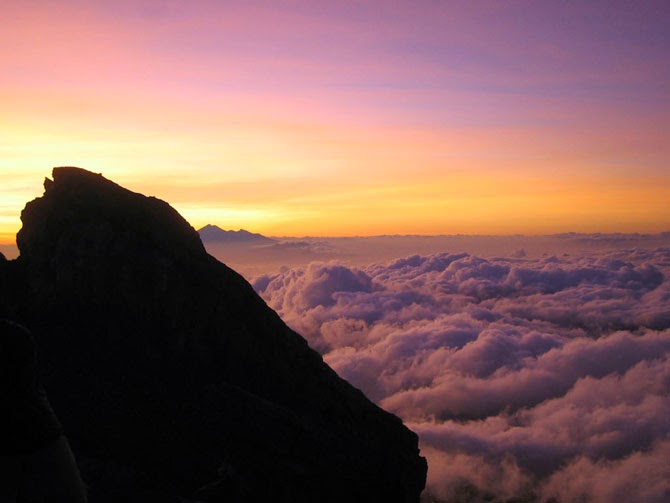 At night time along the shore there is clear evidence that cosmic and the divine forces are little felt or cared for.

It is perhaps another reason I so enjoy my early morning walks, long after the party goers have fallen into their own private slumbers. 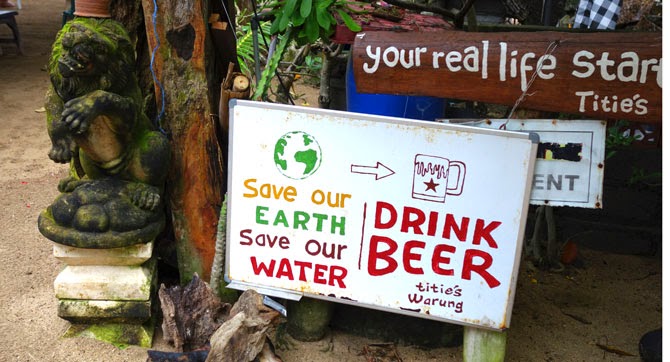 It is as the new day emerges that the peace and beauty of Bali compels you to seek out other things.

Things that don't come in a glass, cannot be paid for, and yet are there to be endlessly enjoyed and appreciated by anyone who makes the effort to see and experience. 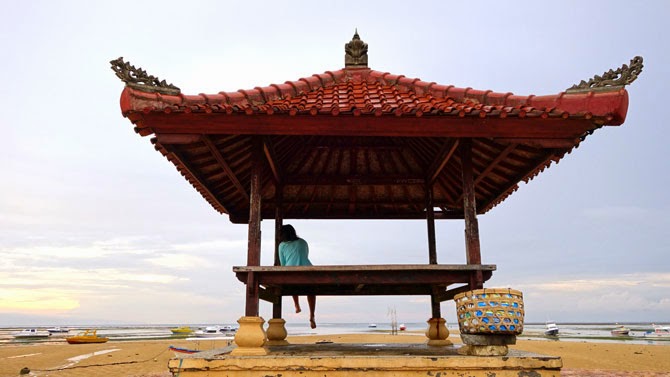 When I live inside my heart,
God visits me
On a regular basis
Early in the morning.
.
Sri Chinmoy, Seventy-Seven Thousand Service-Trees, Part 46, Agni Press, 2006
Posted by Utpal Marshall at 9:11 PM

Beautiful and inspiring as always.

Thanks for sharing these deep feelings and experiences, Utpal. Always a pleasure to read your posts and to enjoy the pictures of course.
You definitly have a gift to chatch the essence of events and make it available to us. By which I can easily feel part of them although I am thousands of kilometers away.