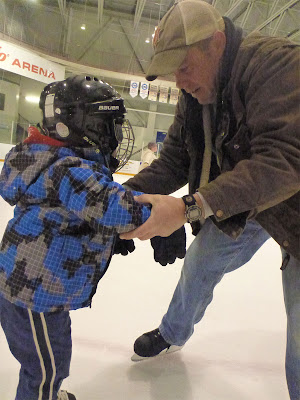 Today, a little Goderich boy named Kane had ice skates strapped to the bottoms of his tiny feet for the very first time.  On this lazy afternoon he was attempting to propel himself forward like millions of other Canadians have done for more than 100 years.  As he was prepared for the event, sitting with his family in the hardwood bleachers of the arena, he was poised to join the sacred, almost universal fraternity of Canadian skaters.

This precious historic moment was safely nestled in the glowing period that lolls between the two towering winter holidays, of Christmas and New Years.   A golden opportunity had opened up in the life of this preschooler.  It consisted of a fortuitous convergence of opportunity, motivation, and timing.  Some of which belonged to him and yet much more belonged to the inevitable force and momentum of the Canadian psyche.

The critical elements also included, besides available ice, competent coaches and trainers for this operation to succeed.  This was fulfilled quite nicely by the attentive encouragement and support of his parents and the appearance of a bonus Uncle, as added backup, should the coaching breakdown in any way.   The most important ingredient in all of this was of course a pair of brand new skates.  Provided no doubt by the recent visit of Santa, who had either brought skates fresh from the North Pole or the local Canadian tire store.

Kane, to his credit, had already clearly mastered all the standard problems associated with humans primary mode of locomotion, namely walking.  Was he ready to adventure forward into the more challenging world of skating was another matter.  I never had much of a discussion with his folks, but my guess was that they had simply decided that today was the appropriate moment to test the waters, or rather the ice.  Regardless, this day, Wednesday December 29th had been anointed as the proud moment when Kane, regardless of the outcome, was going to stride forward in his life and officially take part in the great Canadian past time, skating.

There are a little over 34 million of us stretched across this vast country.  The number of indoor rinks has been calculated to be roughly around 2500, depending upon which census you look at, or believe.  When you factor in as well the countless frozen ponds and lakes that are created, when the heel of the frosty winter boot strikes down hard upon our 10 provinces.   The opportunities to strap on sharp steel onto your feet and fly across expanses of frozen water in this country of ours is tremendous.
This day at the arena there were skaters of all shapes and sizes.  For most regular working folks the slender window of Christmas vacation had already been knocked away faster than if it had been struck by the blade of a Wayne Gretzky slap shot.  So the number of older folk noodling around were misfits and ne're-do-wells much like myself.  I confess to be one who only infrequently straps on skates.   Besides the pleasure of it all I also have to endure an annoying inner  conflict whenever I do find an opportunity to skate.  It is a simple dialogue between my body and heart that goes something like, "boy this is fun and, wow, there is a pain beginning to erupt in my floppy ankles that I haven't felt since last winter, when I swore I would never do this again." 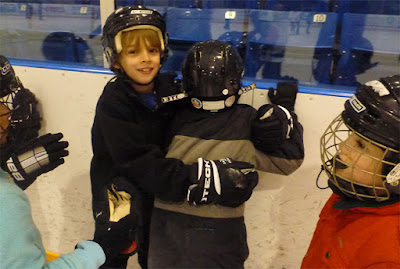 So simply said it was a kidapalooza at the arena.  Lots of tykes with new hockey helmets and dreams of pucks, goals and the tantalizing allure of the NHL.  Brightly dressed little girls who were exploring new spins and perhaps hoping for confidence and talent that they just might be the next Barbara Ann Scott.  The arena air itself was filled with a heady blend of boundless energy, giggles, and just a few groaning aches of those like myself.  We older folk who still held not too distant memories of that magic time when tiredness did not even exist in our once effortless young lives.

I was enjoying all the action whizzing around and about me but it was clear that Kane was perhaps the star attraction today.  He was the smallest little boy by far of all the kids.  I couldn't help but imagine that this day would most likely be one that he might never forget.  Certainly his entourage  would not forget.  As they all masterminded and coaxed this marvelous moment, and occasionally snapped pictures with a small digital camera. 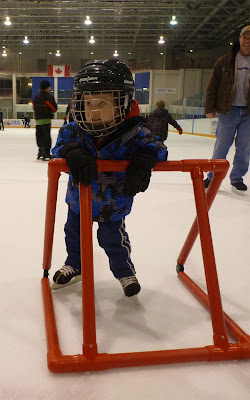 The learning process proceeded  through several distinct phases.  The first was the Dad holding Kane gingerly upright and skating backward. This was observed by an arena full of folk who clearly remembered their own awkward right of passage into skating proficiency.  Kane seemed nonplussed by his apparent inability to even stand upright little alone make forward progress.

Then, just when it seemed that the laws of physics and biomechanics were simply not going to get the job done, modern technology was brought in.  Yes, it was time for the dreaded last resort, the red plastic slidy stand.   Which oddly enough seemed to provide no more advantage than the less practical but emotionally more supportive arms of Dad.  It was evident after some time that the learning curve for Kane's tender was going to be skewed onto a date in the not too distant future.  Eventual success of course was virtually inevitable in this skating crazed country of Canada. 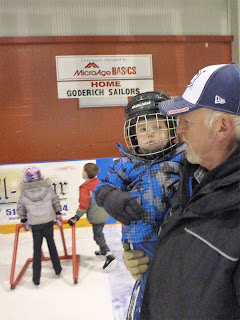 After many minutes of not making any visible progress there was a welcome time out moment.  Kane's uncle stepped in and broke his nephew's seeming inertia and lack of progress.  He simply scooped the little fellow up in his arms and zipped around the arena.  It was only then that Kane could feel that familiar rush of delight that all skaters enjoy.  Have the cool air brush past his cheeks, feel the strides of strong legs churning in a  long familiar motion under him, and hear the rhythmical swish swish of his uncle's skates slicing across the ice.

Throughout Kane's foray into the new and daunting world of skating, I never noticed even an iota of a change of expression in his zen like gaze.  No joy and yet no fear or frustration either.  Perhaps the whole experience was simply overwhelming, a mix of mystery and wonder.   As well neither did he speak a word, utter a cry or laugh with glee.  It was all very puzzling, difficult, but also perhaps he felt the not too distant pleasures of the sport teasing and tempting him.  That perhaps in just a few more days and weeks he would be able to conquer it all on his own. 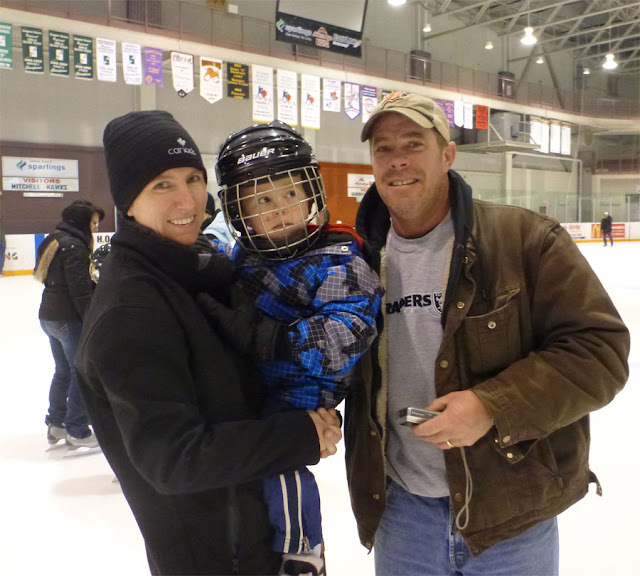 Pretty soon I had had enough or at least my ankles had.  Kane was posing for a few more photos and his folks were no doubt planning some new strategy or just going to bide their time. Wait for nature and growth to provide a little more tweaking of his neural muscular pathways.  Before I left, his folks gave me their camera to take a picture of the little family on this historic day.

An irresistable temptation got the better of me and I found myself asking them if they thought Kane might one day become a hockey player or perhaps a figure skater.  Dad said simply, that Kane was not destined for gliding glory on the ice.  Instead he insisted, Kane was certain to find his rightful success in another sport, golf.
Posted by Utpal Marshall at 3:01 PM

A delightful comment on our great Canadian pastime...skating. Thanks Utpal; loved it. S.