Three Men in the Park 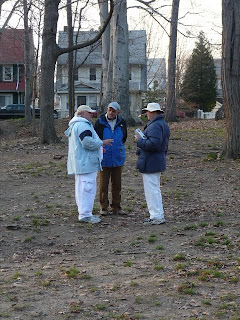 It was not one your typical meetings in a small public park in Queens. Goose pond, at this time of year sees lots of winged wildlife flying in and out through its ragged stand of trees throughout most of the day. The geese presumably are taking a brief break on their way north. Three middle aged gentlemen from the UK marching around to the Hokie Cokie is a much rarer sight. 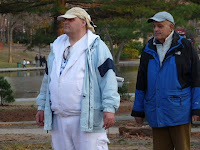 I am not too surprised at the antics I am watching. I have known the three of them for the better part of 4 decades. They have, as well as myself, have been known to cavort in public places in much more peculiar ways than this. What is actually taking place is a serious practice for a funny performance that will take place in just 2 days time. 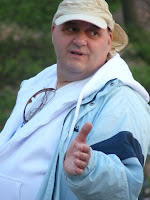 Charana, the leader and mastermind of the little group is under the gun. The group he is working with now are life long friends and the core of a much larger performance ensemble that will be composed of other friends from around the world. He does not work from any script but is intimately familiar with each step and maneuver that will take place when it is performed. 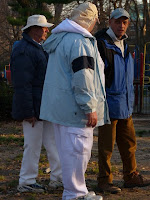 There is a lot of seriousness and concentration in their expressions. The hillside they are marching too and fro on is uneven as well. It does provide at least enough space in which to test out the elaborate choreography, which involves at one point walking like penguins. 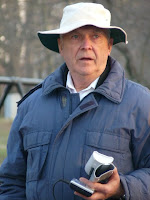 Sanjaya is holding an mp3 player which is attached to a couple of small speakers. I believe it is running out of power because I cannot hear any music at all and I am sitting on a stump nearby. I am told the music playing on it is the Hokie Cokie which I am familiar with. I have to use my imagination as they march back and forth and spin around in unusual and unexpected ways. 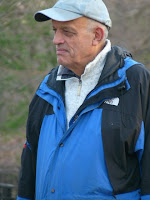 I am trying to not be intrusive with my camera, because the 3 of them are focusing on a technically difficult set of maneuvers. They practice relentless for at least an hour and progress, in getting the steps worked out just right, proceeds grudgingly. The easy part of performing will be many more hours of rehearsal away. 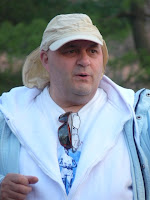 Charana has been staging a circus act like this for years. It has been more than a year since he has done one, but it is easy to tell that he has spent a lot of time working out every detail of the choreography. It will be the highlight of the circus which will take place in just 2 days. In the meantime he will be working with the rest of the cast who will be dressed in bright elaborate costumes. Besides the Hokie Cokie there will be a lots of other music squeezed into the 10 minute performance. 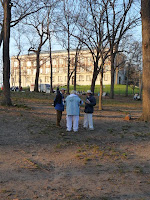 I cannot imagine what a passerby might think if they looked over into the park and expected to see some wild geese and instead saw 3 Englishmen marching around to the Hokie Cokie. If they have been Queens residents for any length of time, probably nothing happening in the park or the neighborhood would be a surprise. 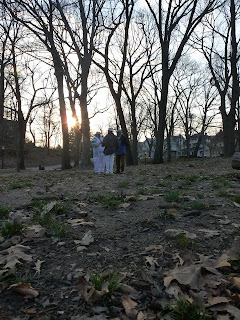 In a few days time all the effort will have been worth it. The performance will delight several hundred people. Humor is my only savior.


God's divine Circus
Has run short of clowns.
Therefore
Today I am asking my mind
To go and accept the job.
Excerpt from Twenty-Seven Thousand Aspiration-Plants, Part 104 by Sri Chinmoy.
Posted by Utpal Marshall at 2:29 PM

Can we assume these dubious tres amigos are bona fide and that the appropriate consent and release forms were duly signed?
pip-pip, Pavitrata

I feel that it is time the world was made aware of the strange obsession of Snapper Marshal. This man has taken to creeping up on unsuspecting souls and stealing frozen seconds of their lives while sneaking in the odd question or two about the current economic crisis or the weather. This talented fellow must be stopped before he makes us all 'Stars of The Supreme Big Brother'. I will not sign autographs, kiss babies or race people in wheel chairs. However those who may in the future want to find fame and fortune in the World of the Spiritual Circus that is lovingly refered to as MADAL, can if they wish join with me and other strange looking old men next April in the park. All you need is a child like heart and a brain with a 3 second memory. There's more but I forget! Sir John Charana Evans.